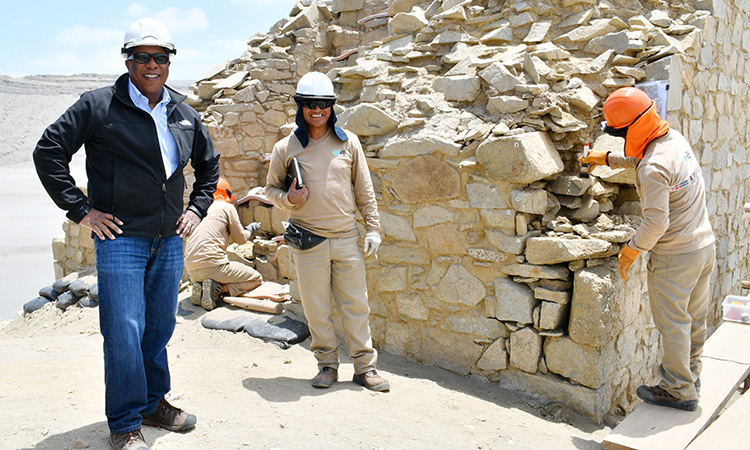 Ambassador Brian A. Nichols visited the 13 towers of Chankillo, the oldest astronomical observatory in the world, winner of the Ambassador’s Fund for Cultural Preservation in 2016 for $125,000.  The project was selected from a field of around thirty projects for the preservation of Peruvian cultural heritage.

The Ambassador’s visit came as part of the 20-year celebration of the Memorandum for the Protection of Cultural Heritage between Peru and the United States. Thanks to this agreement, the U.S. government has recovered illegally trafficked cultural property and trained the National Police of Peru, as well as museum staff in coordination with the Ministry of Culture.  To date the United States has recovered more than 1500 Peruvian pieces of archaeological value.

“It is an honor for us to work together with the World Monuments Fund and in coordination with the Ministry of Culture in the conservation of this 2250-year-old astronomy center,” said the Ambassador, emphasizing the importance of the Memorandum for protection of Cultural Heritage signed in 1997.

During the visit to Chankillo, Ambassador Nichols also announced that the U.S. government will support the renovation of the of the Regional Max Uhle Museum in Sechín through a donation of $13,000. “We are convinced that this project will help to bring value to this heritage area and promote local tourism,” said Ambassador Nichols.

About the Ambassador’s Fund for Cultural Preservation

Peru is the country that has received the most funds among all Latin American countries through the Ambassadors Fund for Cultural Preservation, with more than $1,900,000 for 24 projects in 10 regions: Amazonas, Áncash, Arequipa, Ayacucho, Huancavelica, Ica, Lambayeque, La Libertad, Lima and Moquegua.