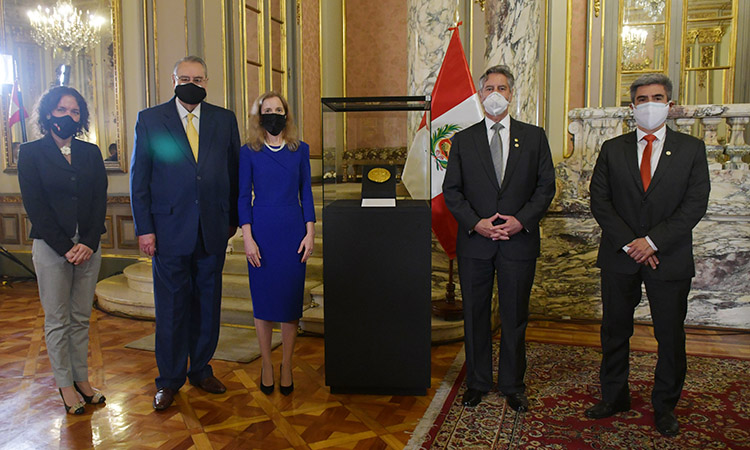 Lima, June 18, 2021.- The United States Ambassador to Peru, Lisa Kenna, participated today in the ceremony presided over by President Francisco Sagasti at the Government Palace in which the “Echenique Disc” was returned to Peru. The disc is an invaluable gold artifact that is recognized as a symbol of the city of Cusco.

Ambassador Kenna highlighted the immense cultural wealth of Peru, typical of its rich civilization, and she celebrated the return of the “Echenique Disc” during the very year that Peru is commemorating 200 years of independence.

“We are very proud to celebrate the return of the ‘Echenique Disc’ as a symbol of friendship and the fruitful diplomatic relationship that characterizes our countries,” said Ambassador Kenna.

The return of the “Echenique Disc” coincides with the celebration of the Bicentennial of Peru. The Smithsonian National Museum of the American Indian (NMAI) and the Government of Peru signed a Memorandum of Understanding to facilitate the return of the invaluable pre-Inca piece and to ensure its inclusion in the National Inventory of Cultural Heritage.