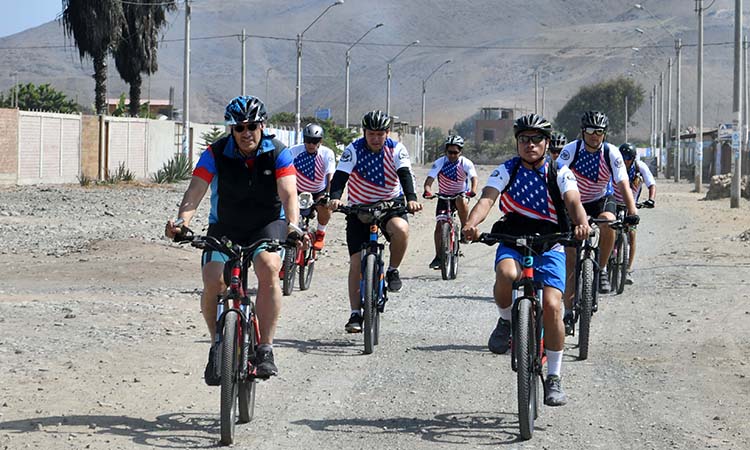 U.S. Ambassador to Peru Krishna R. Urs leads a delegation of cyclists from the United States Embassy April 25-26 to celebrate Earth Day, promote sustainable tourism and healthy lifestyles without drugs, and the use of bicycles as an alternative means of transport. The two-day bicycle tour covers almost 60 kilometers and includes cultural heritage sites and businesses in Cañete and Chincha. On the first day of cycling in Cañete, Ambassador Urs and the biking delegation visited the Vírgen de los Ángeles school in Cerro Azul and participated in a cleanup of the La Costa beach with local students, community members and surfers. Next, Ambassador Urs visited the Susana Baca’s Cultural Center in Santa Bárbara, a site that received support from the U.S. Embassy. Local young musicians performed musical numbers and invited the delegation to participate by playing instruments and singing. In the afternoon, the group visited  U.S. Fulbright scholar Claire Maas’ research project on African-Peruvian heritage of slavery from the 18th and 19th centuries at the Poblado de la Quebrada Center. UNESCO and the Ministry of Culture designated this town as a “Place of Memory of Slavery and Living Cultures”.

On its second day, the delegation meets with students of the Chincha North American Peruvian Cultural Institute (ICPNA) and will talk with alumni of U.S. Embassy programs, as well as with women entrepreneur alumnae of the DreamBuilder program. In the afternoon, the group visits the La Calera farm, the largest egg producer in Peru that feeds uses U.S. corn feed for its chickens, and grows avocados and tangerines for export. In the evening, the delegation participates in a celebration of Afro-Peruvian traditions at the home of the Ballumbrosio family in El Carmen, Chincha. El Carmen also has a “Place of Memory of Slavery and Living Cultures” designation. The goal of the U.S. Embassy Bike Tour program is to strengthen ties between the communities of Peru and the United States and highlight examples of successful collaboration between both countries. We invite everyone to follow the U.S. diplomatic cyclists’ adventure in Cañete and Chincha using the hashtag #USEmbassyBikeTour.