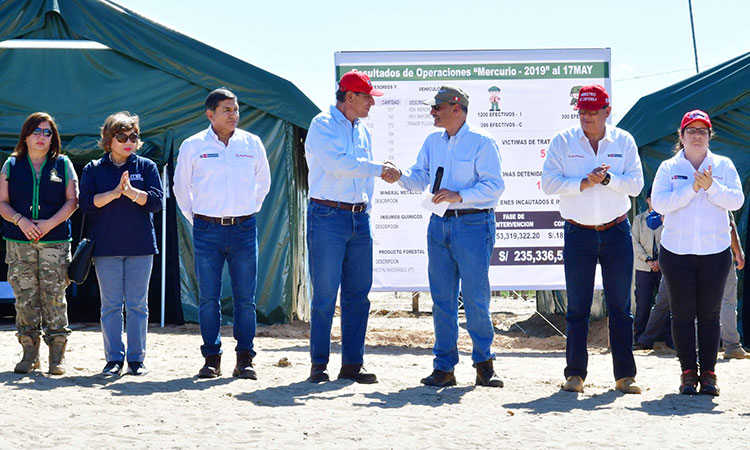 The equipment donated by the Government of the United States, through the Bureau of International Narcotics and Law Enforcement Affairs (INL) section of the U.S. Embassy, consists of 10 tents, 20 air conditioners, eight generators, four fiberglass watercraft, four GPS, 50 flashlights, an anti-venom kit, 50 sleeping bags, and mosquito nets.  This donation is part of approximately $50 million in assistance provided by the United States to Peru, within the framework of the memorandum of understanding signed in 2017 to help Peru combat criminal organizations and the environmental impact of illegal gold mining. The primary objectives of this agreement are to reduce mercury emissions, prevent and sanction illegal mining in protected areas, and promote opportunities and lawful economic development activities.

Ambassador Urs pointed out that illegal mining, mainly of gold, has caused the loss of more than 9,000 hectares of Amazonian forest in Peru in 2018, and has generated other illicit activities controlled by organized crime groups, such as human trafficking, forced child labor, and the trafficking of chemicals such as mercury.

Ambassador Urs remarked, “Operation Mercury is targeted towards illegal mining and related crimes in La Pampa, and is a clear example of the commitment of the Peruvian Government to protect the Amazonian forest from deforestation and fight transnational organized crime.  In recent years, the value ​​of illegal exports of gold have surpassed those of cocaine.”