Official websites use .gov
A .gov website belongs to an official government organization in the United States. 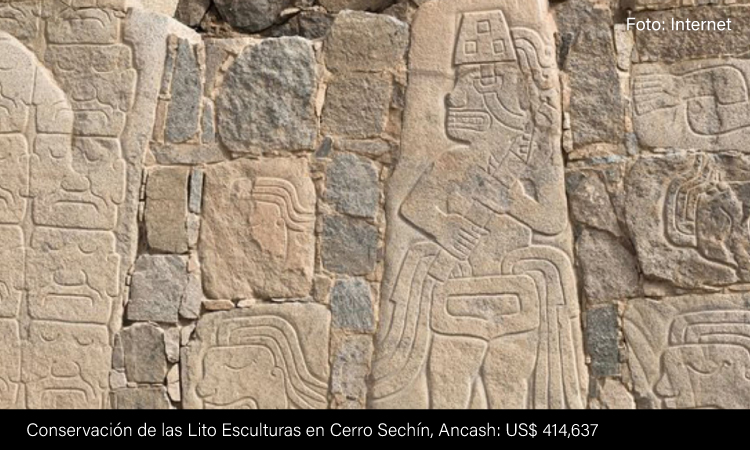 Peru’s rich cultural heritage is recognized for its diversity, artistic quality, and uniqueness. Machu Picchu is Peru’s best-known cultural icon, but archaeological and other cultural sites, including several UNESCO World Heritage Sites are found throughout the country. A prime example is Caral, recently recognized as the oldest city in the Americas, dating back 5,000 years.

U.S. Government support for cultural patrimony resonates powerfully with Peruvians of all social classes and strengthens our bilateral relations with Peru. Protection of Peru’s cultural heritage is a unifying cause that helps bridge class and ethnic divisions. According to a poll, Peruvians take great pride in their past and rate their cultural patrimony (meaning pre-Columbian archaeological sites and, to a lesser degree, colonial art and architecture) as the second most representative attribute of their culture after Peruvian cuisine.

All U.S. Government activities that help conserve Peru’s cultural heritage fall under the Memorandum of Understanding (MOU) for Cultural Property Protection signed between the governments of Peru and the United States in 1997. The United States have renewed the MOU every five years and it is currently valid through 2022.

Through the U.S. Congress-funded “Ambassadors Fund for Cultural Preservation” program, the U.S. Embassy conducts an annual competition that has funded 31 conservation projects in 14 regions throughout Peru for a total of $3,357,420 since 2001.

The following are projects funded through the Ambassadors Fund for Cultural Preservation.

2001 | $22,275 to purchase preventive conservation equipment for 18 museums throughout Peru.

2003 | $23,085 for a conservation project for the pre-Columbian textile collection of the Lima Art Museum in Lima.

2004 | $25,660 for a museography and conservation project at the Leymebamba Museum/Mallqui Center in Amazonas.

2005 | $30,000 for the conservation and restoration of 49 colonial paintings at the Santa Catalina Monastery in Arequipa.

2006 | $22,575 for the acclimatization, conservation, equipment supply, and promotion of the San Marcos Archaeological and Anthropological Museum in Lima.

2007 | $30,000 for cataloguing and protecting the National University of Huamanga’s archaeological and historical collection in Ayacucho.

2007 | $14,182 for a physical security seminar and fieldwork to design a safety plan for cultural heritage sites in Peru that took place in Lima and Ayacucho.

2008 | $26,514 to inventory and catalog patrimony objects located in the churches in the historical center of Arequipa.

2008 | $ 29,910 for the registration, cataloguing, and conservation of archaeological collections at the Sicán National Museum in Lambayeque.

2008 | $ 16,881 for the conservation and renovation of the archaeological collection at the Contisuyo museum in Moquegua.

2009 | $40,000 for the preservation of artifacts found at the Kuelap Fortress in Chachapoyas.

2009 | $21,600 for a physical security training and protection of cultural heritage sites in Ayacucho.

2013 | $49,395 for the conservation and registration of Moche mummies at the Cao Museum in the El Brujo Archaeological Complex in La Libertad.

2014 | $82,400 for the conservation, restoration and museographic project at the Museo Arqueológico Samuel Humberto Espinoza Lozano in Huancavelica.

2014 | $100,000 for the conservation and registration of mummies and artifacts at the Site Museum Arturo Jimenez Borja Puruchuco in Lima.

2016 | $125.000 for the conservation of 4th-Century BC Astronomical Horizon Markers at Chankillo Archaeological Site in Ancash, the oldest solar observatory of America.

2017 | $173,660 for the preservation of the Ichma culture pyramid in the archaeological site of Mangomarca in San Juan de Lurigancho, Lima.

2018 | $100,000 for the conservation of the Inka temple in the archaeological site of Huánuco Pampa in Huánuco (in progress).

2019 | $150,000 for the conservation of the National University of Trujillo’s collections of Pre-Hispanic and colonial objects.

2020 | $172.000 for the preventive and curative conservatio of the cultural heritage artifacts of the Site Museum and deposits of the Huacas de Moche in La Libertad.

2021 | $52,000 for the conservation of ethnographic objects associated with the ancient huntresses of the Ilave Basin in Puno.

2021 | $475,299 for a collaborative investigation and exchange-centered training in the management of the photographic works of Martin Chambi.