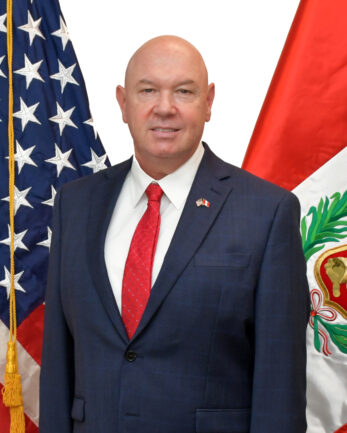 John McNamara is a career member of the Senior Foreign Service of the Department of State. He assumed the role of Deputy Chief of Mission of the United States Embassy in Lima in June 2021.

John has served in a variety of Department positions in Washington and abroad. He was most recently a Visiting Professor at the National Defense University in Washington DC. Previous Washington assignments included working twice in the Office of Mexican Affairs and as the Senior Venezuela Desk Officer in the Bureau of Western Hemisphere Affairs.

Abroad, John served multiple tours at the U.S. Embassy in Bogota, Colombia, including as the Political Counselor during the final two years of the Colombian government’s peace negotiations with the Revolutionary Armed Forces of Colombia (FARC). Additionally, he was assigned in Iraq as a Provincial Advisor in Babylon, and in a later tour, as Deputy of the Ministry of Interior Transition Team in Baghdad. In two Afghanistan tours, he served as Deputy of the Kandahar Provincial Reconstruction Team, and in a subsequent tour he led the International Narcotics and Law Enforcement Affairs section at the U.S. Embassy in Kabul.