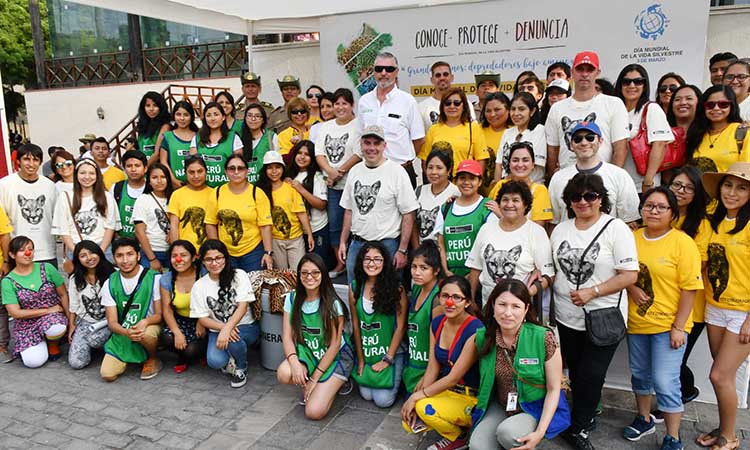 The U.S Embassy in Lima, the Ministry of Environment, the Ministry of Agriculture, the National Service of Natural Areas Protected by the State (SERNANP), the National Forest and Wildlife Service (SERFOR), the Municipality of Surco and the nonprofit organization Wildlife Conservation Society (WCS) celebrated International Wildlife Day on March 3, a day proclaimed by the United Nations to mark the signing of the Convention on International Trade in Endangered Species of Wild Fauna and Flora (CITES). International Wildlife Day seeks to raise awareness of the world’s flora and fauna, particularly species that are threatened or endangered.

Held in the Parque de la Amistad in Surco, the event included a photograph exhibit of big cats, an assembly of a “crime scene” of confiscated products to show the work done by police and environmental prosecution experts, and various children’s activities.

This year’s theme was “Big cats, predators under threat,” and the Directorate of Sustainable Management of Wildlife Heritage from SERFOR and the Directorate of Sustainable Conservation of Ecosystems and Species from the Ministry of Environment, with the support of the WCS and the U.S. Embassy, organized the public event. It called attention to two particular species, the puma (Puma concolor) and the jaguar (Panthera onca), iconic cats that are in danger due to the destruction of their habitat and the trafficking of their skins and other byproducts.

An immensely diverse country, Peru is ranked the No. 1 country in the world for diversity of saltwater fish species with roughly 2,000 different species. It is second place for its number of bird species with 1,816 species and third place for mammals with 515 species. Unfortunately, the biodiversity of Peru faces many threats, including wildlife trafficking. In recent years, this transnational crime has expanded rapidly, and it is believed to reach $23 billion USD annually. Jaguars and pumas in particular are in danger from wildlife trafficking. Pieces from jaguars are sold for more than $3,000 USD in some markets. These products are bought in every country.

In 2016, SERFOR enacted its National Strategy to Reduce Illegal Wildlife Trafficking in Peru and 2016-2022 Action Plan, developed to combat wildlife trafficking and protect Peru’s enormous diversity. To reduce demand, SERFOR has a national communications campaign called, “If you buy, you are an accomplice” (www.sicompraserescomplice.com), which is part of the World Wildlife Day event. We must work together to combat wildlife trafficking. If there are no consumers for these products, there will be no dealers! Be aware, protect and report!