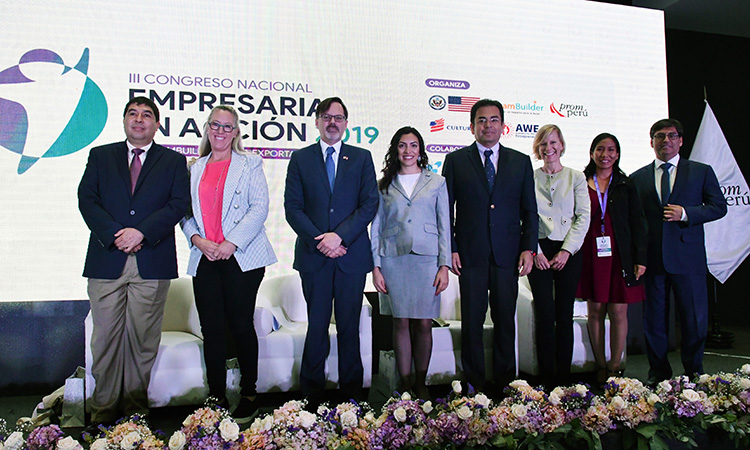 The Charge d’Affaires of the United States Embassy, Denison Offutt, participated in the inauguration of the Third National Congress of Businesswomen in Action 2019. The Congress took place on November 14 and 15 in Lima and It brought together more than 100 women from 16 regions of the country, trained by the US entrepreneurship program “Dreambuilder” and the PromPerú program of “Ella Exporta” (“She Exports”). Participants exchanged experiences about their business stories which have allowed them to improve themselves and achieve a better quality of life, as well as the recognition of their community. The Director for Latin America of “Thunderbird for Good” Cindy Yeager, the Export Director of PromPerú Mario Ocharán and local authorities attended the inauguration.
Since 2016, the United States Embassy has financed the “DreamBuilder” training program with more than $ 100,000, in a coordinated effort with the Peruvian-American bi-national centers, the NGO “DreamBuilder” and Thunderbird for Good.
Charge d’Affaires Offutt emphasized that, to date, more than 800 entrepreneurs in Peru have been certified in the Dreambuilder program, and more than 100 have benefited from seed funds and English scholarships granted to the best business plans.

“Following the successful DreamBuilder experience, we have launched the Academy for Women Entrepreneurs. This new phase will be developed through partnerships with universities to reach more women with management training, business models and plans and success stories. The Academy is being implemented in 26 countries. Based on the DreamBuilder platform, we hope to train 50 million women by 2025, ”Offutt explained.