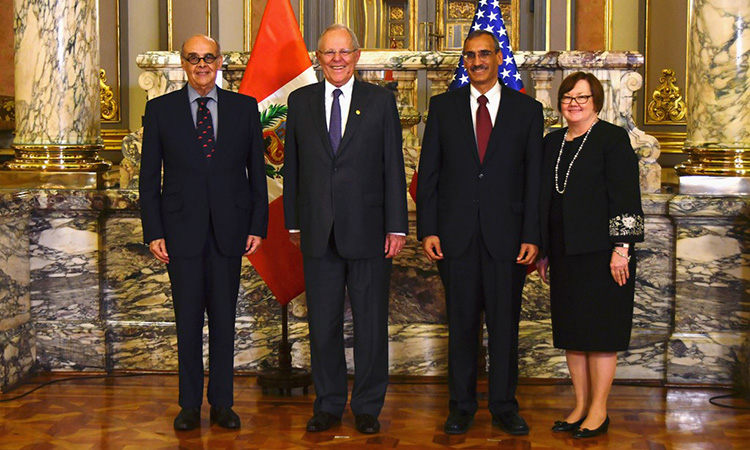 The new Ambassador of the United States in Peru, Krishna R. Urs, began his duties in Peru after presenting credentials on Oct. 24 before the Government of Peru.

“It is an honor to return to Peru and witness the dramatic growth and positive change that have projected the country into a position of regional leadership. The strength of our bilateral relationship crosses all sectors, with particular emphasis on partnership, two-way bilateral trade, and combatting transnational organized crime,” said Ambassdor Urs.

A 31-year veteran of the Foreign Service, Krishna “Kris” R. Urs assumed duties as Deputy Chief of Mission at the United States of America Embassy in Madrid, Spain in June 2014, and Chargé d’Affaires in January 2017.

Previously, he served as the Deputy Assistant Secretary for Transportation Affairs and Chief U.S. Government Aviation Negotiator at the Department of State from November 2010 until June 2014. He also served as Director in the Office of Aviation Negotiations in the Bureau of Economic, Energy and Business Affairs in the Department of State (September 2009 until October 2010), Charge d’Affaires, a.i. at the U.S. Embassy in La Paz, Bolivia (from September 2008 until June 2009), Deputy Chief of Mission at the same embassy (from July 2006 until September 2008), Director of the Office of Economic Policy and Summit Coordination in the Bureau of Western Hemisphere Affairs at the Department of State (from 2003 until 2006).

Ambassador Urs is a 1980 graduate of Georgetown University, where he studied Latin American politics and economics at the Walsh School of Foreign Service. He earned a Masters Degree at the University of Texas in economics (1985). He speaks Spanish and Hindi.