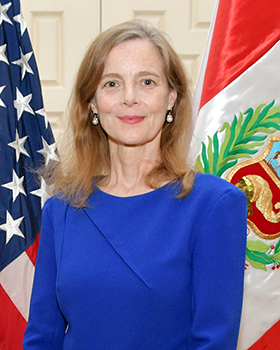 Ambassador Lisa Kenna is a career member of the Senior Foreign Service, class of Minister Counselor.  She served most recently as the Executive Secretary of the Department of State.  Prior to that, Ambassador Kenna held positions as the Executive Assistant to the Secretary of State, a Political Adviser in the Office of the Secretary of Defense, and the Director for Iraq at the National Security Council.  She also served as chief of the Political Section at the U.S. Embassy in Jordan, in addition to assignments in Egypt, Pakistan, and Eswatini.

Ambassador Kenna earned her B.A. at Middlebury College and a J.D. at the University of Connecticut School of Law.  Before joining the government, she was an attorney in private practice.  The recipient of numerous State Department Awards, Kenna speaks Arabic, Dari, and Urdu.