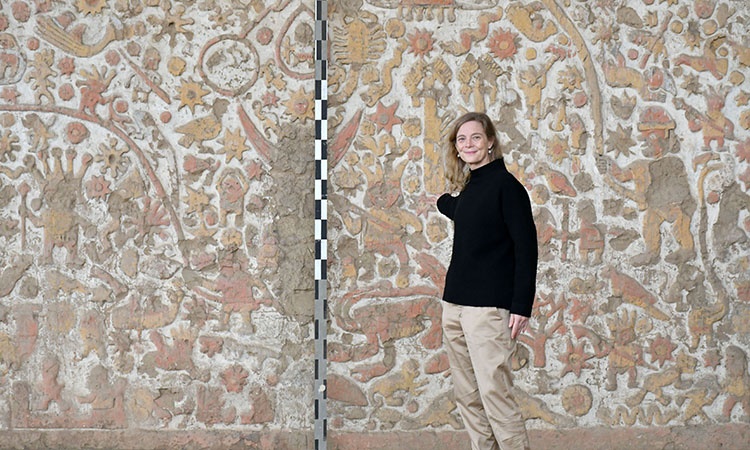 Ambassador of the United States, Lisa Kenna, visited the museum and archaeological site Huacas del Sol y de la Luna, winner of the contest for the Ambassador’s Fund for Cultural Preservation of 2020, with an amount of $172,000 dollars. During her first visit, Ambassador Kenna congratulated the general director Ricardo Morales, for 30 years of excellent work preserving the cultural heritage of the Huacas de Moche Project, and the director of research Carlos Rengifo, for his great work on the site and the museum. She was impressed with the wonderful architectural heritage of the Huaca de la Luna and the artistic quality and richness of its mural designs. Finally, she congratulated her hosts for the progress of the Ambassador’s Fund project, which is currently being exhibited in the temporary exhibition “Plumas y Metales Chimú en Huacas de Moche”, at the facilities of the “Santiago Uceda Castillo Museum” and thanked Mr. Alfredo Pinillos for the support of the “Huacas de Moche Board of Trustees” in managing the donation from the Ambassador’s Fund.

Ambassador Kenna expressed: “The Ambassador’s Fund allows us to show our respect and admiration for the millenary culture of Peru, further strengthening our bilateral relations. As a result of our work together, we have had the privilege of supporting 27 projects in 11 regions of Peru, which through the conservation of Peru’s cultural heritage, has offered training and employment for the local community and generated academic exchanges between professionals from our two countries.” The results of the 2021 Ambassador Fund program will be announced shortly.

The Ambassador also visited the Laboratory of Archeology and Conservation of the Huanchaco Archaeological Program of the National University of Trujillo, which is in the final phases of the implementation and conservation project financed with the Ambassador’s Fund 2019. It is important to highlight that within the “Route Moche ”, the Ambassador’s Fund has also supported projects in the Chan Chan Site Museum (2005), in the Cao Museum in El Brujo (2013), in the National Museum of Sicán (2008) and in the National Museum of Royal Tombs of Sipán (2011).

Peru has received the most funds in Latin America through this program, with a total financing of almost $ 2.5 million. (https://pe.usembassy.gov/es/education-culture-es/fondo-del-embajador-peru/). All this support is done within the framework of the Memorandum of Understanding for the Protection of the Cultural Heritage of Peru, which is about to celebrate 25 years of active and fruitful work. The call for the Ambassador’s Fund for next year will open soon and the information can be found on the Embassy’s website https://pe.usembassy.gov/es/ and its Facebook account https://www.facebook.com/Peru.usembassy/. Those interested can also write to LimaPDgrants@state.gov for more information