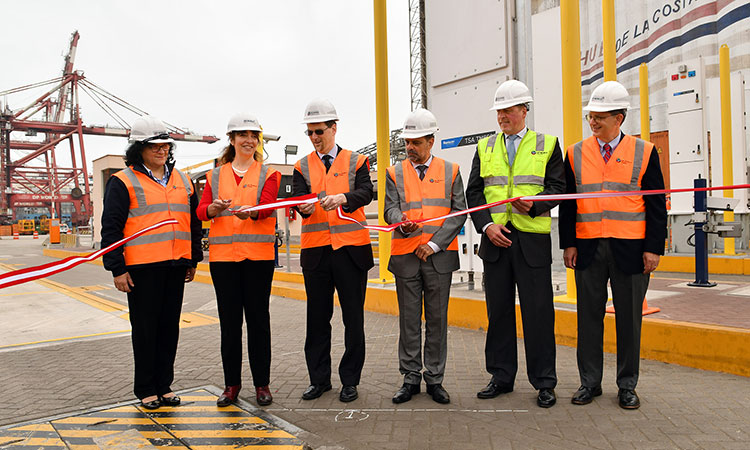 Ambassador Gwyneth Kutz of Canada and Deputy Chief of Mission Mark Wells from the United States Embassy launched the implementation of the project to Strengthen Cargo Container Security at the DP World Terminal at the Port of Callao today. The United States and Canada prioritized the Port of Callao for assistance from the Department of Energy’s Office of Nuclear Smuggling Detection and Deterrence as the Port is currently the busiest container port on South America’s Pacific coast. Peru plays a vital role in ensuring that material shipped to the United States and Canada through its ports is free of illicit material, thereby reducing the risk of a nuclear incident.

Today marks the first milestone in the project with the handover of twelve radiation detection monitors to the government of Peru. Peru’s Taxation and Customs Authority (SUNAT) will now be able to scan all container traffic through the DP World Terminal, with the Institute for Nuclear Energy (IPEN) conducting searches and seizures of any illicit material detected. The Office of Nuclear Smuggling Detection and Deterrence will continue to provide advisory support to Peruvian partners in the operation and maintenance of the devices.

In September, the United States is set to complete the transfer of two Mobile Detection Systems to IPEN so that the Institute can provide for rapid detection of harmful, radiological elements throughout Peru. The final phase of the project includes the provision of an additional six detection devices to SUNAT so that all cargo trafficked through the APM Terminal at the Port of Callao can be screened by the end of 2019.