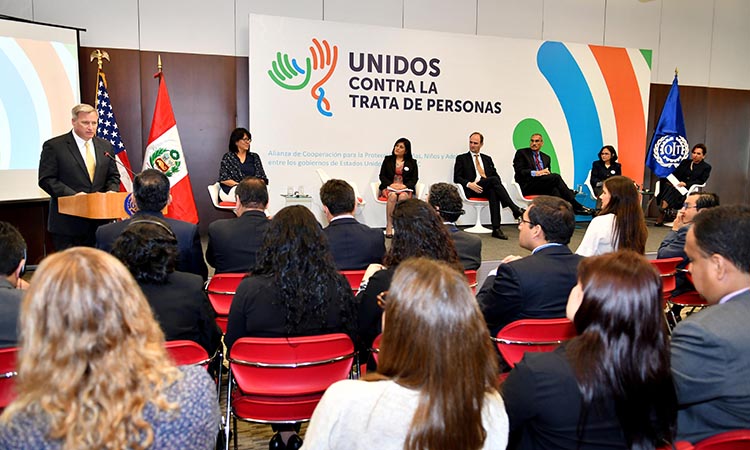 Ambassador at-Large John Cotton Richmond, of the U.S. Department of State’s Office to Monitor and Combat Trafficking in Persons (TIP Office), arrived in Peru for the implementation launch of the “Child Protection Compact” (CPC), a four-year plan that will strengthen efforts to prevent and sanction child trafficking and provide services to victims.

The implementation ceremony of the CPC Partnership was held at the headquarters of the International Labor Organization (ILO) with the presence of Ambassador Richmond, the Ambassador of the United States to Peru Krishna R. Urs; the Vice Minister of Interior for Public Safety, Nataly Ponce Chauca; and the Vice Minister of Vulnerable Populations, Cecilia Aldave. The project implementers are the ILO and the Yanapanakusun Center, and its partners – the Institute of Legal Defense, and Capital Humano y Social Alternativo.

Ambassador Richmond emphasized: “Child trafficking has a devastating and lasting impact on child victims, and also threatens a country’s future, public safety, and national security.  For these reasons, combating human trafficking is one of the highest priorities for the United States. An effective response requires a comprehensive approach across the 3Ps of prosecution, protection, and prevention.”

Peru is the first country in Latin America to sign the CPC Partnership with the United States and is expected to become a model for the region. The Government of the United States will invest $5 million in support of Peru’s efforts to deal with child trafficking and counteract its harmful and lasting impact on victims and society. Human trafficking undermines the rule of law and is associated with transnational organized crime. In Peru it is also linked to illegal mining.

Technical teams from the TIP Office traveled to Cusco and Iquitos to further implementation of the CPC Partnership through its partners.

The Government of the United States has invested more than $32 million in programs to support Peru against human trafficking, child labor, violence against women, and to improve the quality of life of vulnerable and marginalized populations.

The U.S. Department of State leads the United States’ global engagement to combat human trafficking and supports the coordination of anti-trafficking efforts across the U.S. Government. Within the Department of State, and under the direction of Ambassador John Richmond, the TIP Office partners with foreign governments, international organizations, other federal agencies, civil society, the private sector, and survivors of human trafficking to develop and implement effective strategies to confront modern slavery. The TIP Office is responsible for bilateral and multilateral diplomacy, targeted foreign assistance, and public engagement on trafficking in persons.