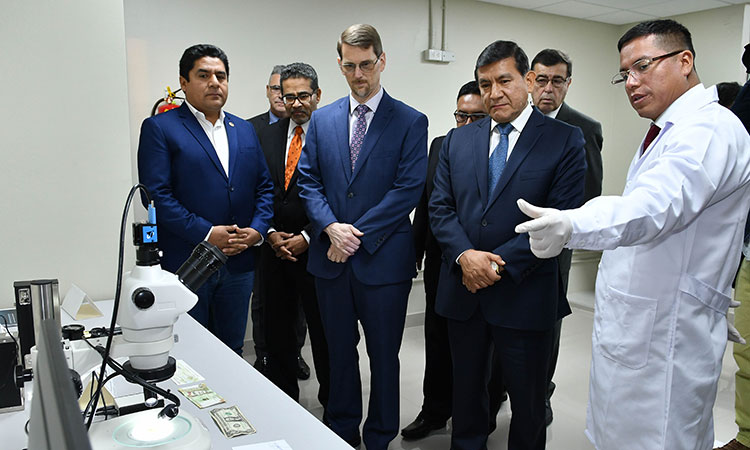 U.S. Embassy Charge d’Affaires Mark Wells helped open the renovated Peruvian National Police (PNP) Forensics Laboratory in Callao and presented a donation of 25 motorcycles to the PNP. To date, the collaboration between the U.S. Government and the Police Region of Callao totals $2.1 million.

Minister of the Interior retired PNP General Carlos Morán; General Commander of the Police José Luis Lavalle; Chief of the Police Region of General Callao, Edgardo Garrido, as well as local authorities and representatives of the Neighborhood Councils of Callao attended the inauguration and donation ceremony.

Charge d’Affaires Wells said in his remarks, “These new facilities with high-tech equipment will allow the police to provide a rapid law enforcement response. We expect the forensics lab will support the Peruvian National Police of Peru and judicial authorities in the effective handling and processing of forensic evidence and evidence obtained at crime scenes. This renovated laboratory will reinforce analysis and research through various units, including forensic biology and chemistry, toxicology, handwriting analysis, and ballistics.”

Chargé d’Affaires Wells added, “Our operational support to the PNP is possible thanks to the “Model Police Station” initiative of the Embassy’s International Narcotics and Law Enforcement Section, implemented in partnership with five police stations in Callao. Through this program we support since 2014, we improve capabilities to combat crime, and create links between the police and the communities of Callao. Police officers close to their community are essential to strengthening the conditions for security and trust. The police-community alliance is the best prevention against crime.”

The Chargé d’Affaires concluded, “The United States cooperates with the Peruvian National Police in various training programs to combat organized crime and protect the rights of citizens in Peru. We recognize the sacrifice of the brave police officers who fulfill their mission every day providing security and working for Peru’s development and welfare. We trust that our contribution will contribute to the police work in the service of the community and for the benefit of the residents of Callao, who aspire to live in peace and security.”