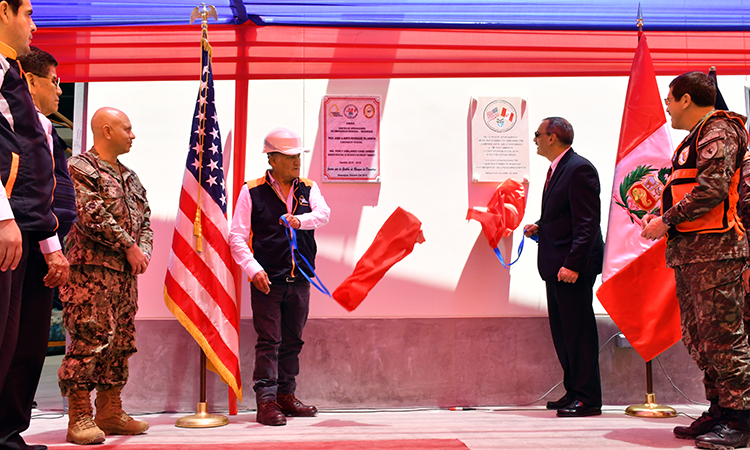 The Ambassador of the United States in Peru, Krishna R. Urs, and the and the Director of the Peruvian Civil Defense Institute (INDECI), Brigadier General Jorge Chávez, participated in a ceremony today to deliver the Regional Emergency Operations Center (COER) Moquegua, built by the United States Southern Command through its Humanitarian Assistance Program.

At a cost of over 6.5 million Peruvian soles ($2.25 million), COER Moquegua includes a Disaster Response Warehouse and a Search and Rescue training facility, and is part of a long-term project aimed at increasing the region’s response capacity to respond to emergencies and natural disasters.

The COER Moquegua is the fifteenth facility built by the United States in the same number of regions of Peru.  Three more regional emergency centers are in full construction, and another two are in the planning stage.

“We congratulate the joint work with the Peruvian authorities at the national and regional levels. We are pleased to contribute with the efforts of public and private institutions and the community to face the challenges posed by nature.  Today we continue our commitment to respond quickly and in a coordinated manner to natural emergencies.  With the donation of the COER Moquegua as well as the equipment and training of its personnel, we show the commitment and the strong relationship between our countries for the effective prevention and response to emergencies caused by natural disasters, in support of the families and communities of Peru,” said Ambassador Urs.

Since 2006, the U.S. Southern Command has invested more than 141 million Peruvian soles ($44 million) in 277 projects in Peru through its Humanitarian Assistance Program focused on the prevention and management of emergencies caused by natural disasters.