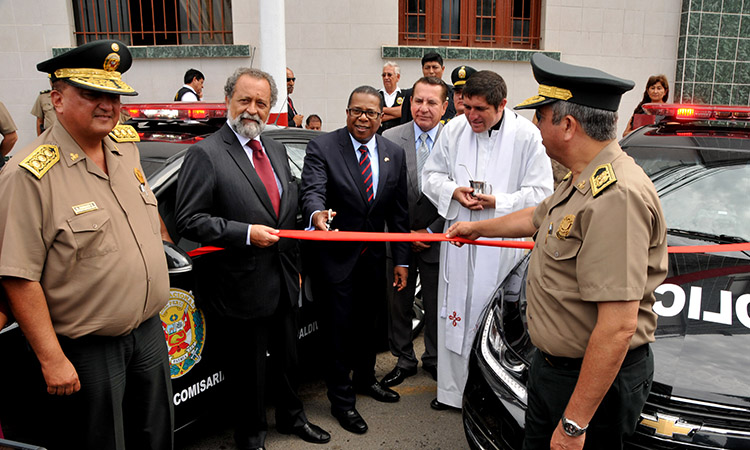 The United States Ambassador to Peru, Brian A. Nichols, delivered a large donation of computer equipment, software, and furniture to the Callao Police Department for Emergency Central 105. In addition, vehicles and motorcycles were donated to four police stations. Deputy Minister of Public Security, Ricardo Valdés, and director general of the National Police, Police Chief Vicente Romero Fernandez, among other authorities participated in the ceremony today.

The donation, made under the “Commissariat Model Program,” was launched after the Ministry of the Interior and the International Narcotics and Law Enforcement Affairs Bureau (INL) of the United States Embassy signed an agreement, with the participation from the National Police.

At an approximate value of  US $ 190,000 the donation includes 12 monitors for real-time control, five computer systems, office furniture, four Chevrolet vehicles and 14 motorcycles for Model Commissaries, as well as 24 desk sets for the drivers of the 14 donated motorcycles.

The donation will strengthen training, technical assistance, equipment, and mentoring activities. The donation includes installation and deployment of screens on a wall of the Emergency Central 105, where the National Police will be able to monitor streets, observe traffic patterns, and follow the movement of police vehicles. As a result of these improvements, police response time to emergency calls will be reduced considerably.

The Model Police Station program provides community policing strategies as a way to prevent and reduce crime, family violence and insecurity, and as a way to improve interactions between the police, the community, and local organizations.  This complements the efforts of the government’s “Barrio Seguro” (Safe Neighborhood) program to improve citizen security.