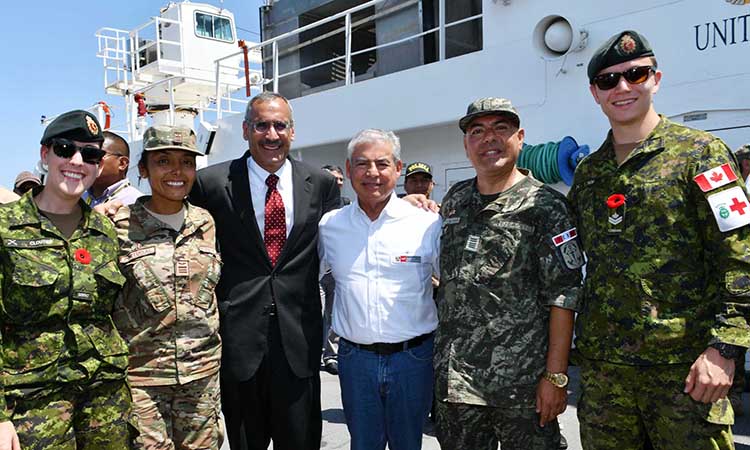 U.S. Ambassador to Peru Krishna R. Urs, President of the Council of Ministers César Villanueva, Minister of Defense José Huerta, and senior civilian and military officials traveled today to Paita, Piura Region, where they participated in a moving ceremony to recognize a successful medical assistance mission involving 200 doctors, nurses, and military technicians, plus U.S. civilian and partner nations who treated thousands of patients in northern Peru.

“Once again we have demonstrated the depth of the bonds of cooperation and friendship between the United States and Peru. We congratulate the joint work carried out with the Peruvian authorities at the national, regional, municipal, and local levels, including the Ministry of Defense, the Ministry of Health, the National Institute of Civil Defense (INDECI), the Peruvian armed forces, and the Peruvian National Police,” said Ambassador Urs.

The medical mission of the USNS Comfort that began on November 1 concludes at the end of today. During their stay in Peru, the USNS Comfort medical personnel provided medical consultations and treatments in the city of Paita to thousands of patients from Piura and people from different parts of the country, as well as surgical operations aboard the ship.

Ambassador Urs acknowledged the constant efforts of the United States Southern Command to deepen and strengthen cooperation with Peru through multiple humanitarian assistance, disaster prevention, and social inclusion programs. “This demonstrates the commitment of the Government of the United States to our partners in the hemisphere to face shared challenges, including support for humanitarian efforts in the health sector,” he said.

This is the third deployment of the USNS Comfort to Peru. In 2011, the Comfort arrived in Paita and in 2007 to Salaverry and also served thousands of patients. The USNS Comfort provides rapid mobile surgical care in support of military operations, disaster response, and humanitarian assistance. It also promotes inter-operability with host nation naval partners. The USNS Comfort played an essential role in 2010 after the devastating earthquake in Haiti. In 2017, the Comfort deployed to Puerto Rico after Hurricane Maria and provided care to victims.